Although we now refer to North Country Quilts, during the 1930’s it was
called ‘Durham quilting’ when it was promoted through England and
abroad.

The Rural Industries Bureau raised the profile of quilting and gave it
a new lease of life in County Durham and South Wales (which also has
a great quilting tradition). The Rural Industries Bureau wanted to
revive various crafts in ‘distressed areas’ including quilting. During 1929
a record was started of quilters who wanted orders for work.
Wholecloth Quilts were made to a very high quality and sold in London.
This cot quilt was made to sell at Little Gallery, London (1930-1939). It is
cream on one side and fawn on the other with bellows and flower motif in
the centre, and a border of roses within circles. 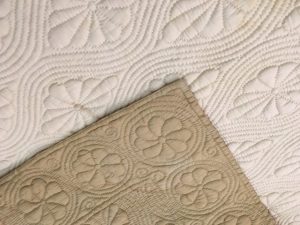 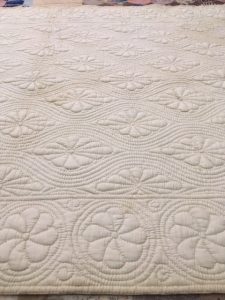 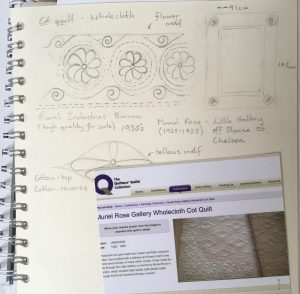 In 1932 the V & A Museum commissioned a wholecloth quilt. It was
made by Mrs Nina Pirt, a coal miner’s wife who lived in Spennymoor. This link takes you straight to the photo and description.

Dressing gowns, tea cosies, cushions and soft toys were also made for
sale.

Durham quilting was also promoted by Miss Armes who encouraged the
craft in the Women’s Institute and entries in the agriculture shows
were fierce.

To encourage the quality of the Durham Quilting Lady Headlam set up
the Northern Industries Workrooms in 1933. Work was in demand and it
was sold at Liberty’s, to Claridge’s Hotel for bed coverlets and commissioned by
private customers.

The Quilters Guild Museum Collection has a lovely green and red example of a wholecloth quilt made at Barnard Castle Workshop (1930-1940)
http://www.quiltmuseum.org.uk/collections/wholecloth/northern-industries-workroom-quilt.html

As with the quilt clubs the market collapsed in 1939 due to the Second World
War.

Next week we will look at patchwork and applique in the Northern Dales , the various patterns and colour combinations used.