This strippy is beautifully quilted, when I was drawing and sewing the patterns I felt great admiration for the lady who made it. 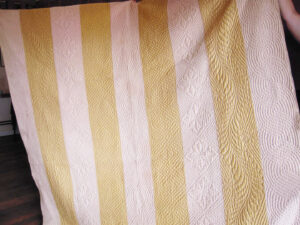 There are two patterns with stars on , one with a running feather, the other in a diamond framework which would look good as a border on any quilt.

This design is interesting as I think it has been drawn by interlocking two hearts. It is the easiest way to draw the design and she may have had a heart template handy to use.

The last quilted sample is a flowing bellows design with a perfectly formed leaf in the middle and the classic diamonds in the outside spaces. It looks rather Art Deco to me which ties in with  the  date of the quilt (1900-1920). The quilters would have used traditional motifs passed down to them through the family and community but I think they would also have been influenced by the designs and arts of the day too.