This spring I have been travelling to see my family Sean and Camila in Costa Rica and Caitlin in Lisbon, Portugal. Costa Rica does not have a distinctive tradition of embroidery so I decided to look at the Central American embroidery from Mexico. Having done research on the internet I then bought a book’ Mexico bordado’ by Gimena Romero . This book is inspiring, it shows different types of embroidery and gives you clear instructions on how to do the stitches. It is in Spanish but the photos are so good I could work from them to do a sampler .

I enjoyed the picture making of Bordado purepecha. Building up a story scene was a lovely restful activity. I used a couching stitch, detached chain stitch , french knots and stem stitch. 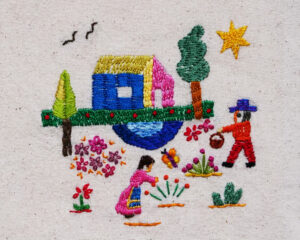 Otomi embroidery from central Mexico has been sewn for centuries but evolved in the 1960’s as a desperate need for income after severe droughts . The designs are from native flora and fauna and spiritual beasts. I started off using images from the book but soon started drawing my own images from animals and fauna I saw in Costa Rica .

Sean had previously bought me a cloth from Mexico which is Otomi embroidery. This is a close up of some of the design. It is mostly sewn in herringbone stitch with stem stitch used for lines. 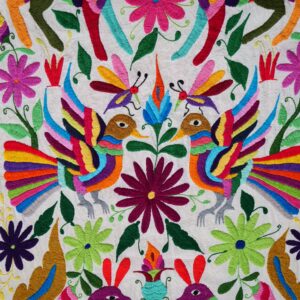 Caitlin also bought me a Mexican piece of embroidery which is quite unique and I am still investigating its origin. If anyone has seen anything similar I would love to know about it . 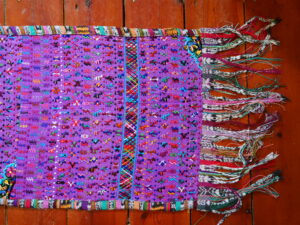 I have enjoyed my Mexican sewing and will certainly be using these techniques in the future maybe with a Yorkshire twist.