Patterns and motifs were created using everyday objects and card shapes which were inspired from nature.
Folded paper
A great way to make a central design, rose or star is to fold a circle of paper from its centre point and then cut the outer section to create a flower or star shape. Then the quilting lines can be drawn in to create the effect desired.

Card templates
Stylized shell and flower motifs can be drawn on card and used on repeat designs throughout the quilt. I use a compass and ruler to start the shape off but I think the quilters in the Dales would have developed the skill to draw freehand. 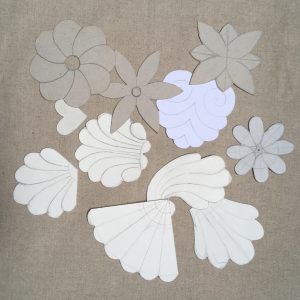 Everyday objects
This design is called ‘flat iron’, an iron would have been drawn round, giving an outside shape to fill with feather and flower motifs. 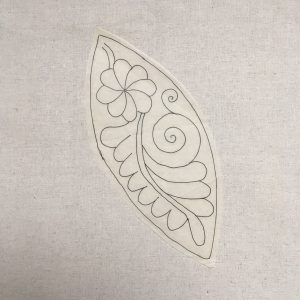 ‘Wineglass’ was a popular infill pattern and any circular glass could be used. Pennies were used to draw feather motifs. The penny gave the top curve of the feather, then the lines were drawn freehand keeping the curve flow to the centre line. 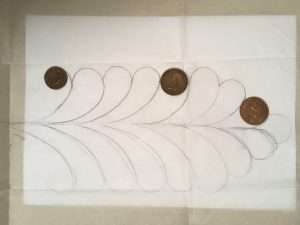 Border patterns
The Cables, Trails and Plaits look complicated but can be broken down into units using the iron shape. This motif is overlapped and repeated to make the skeleton outline to quilt. 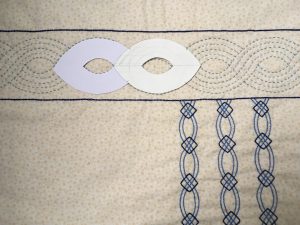 ‘Stamped Tops’ 1880’s onwards
One of the reasons the North Country quilts continued to be made in the Northern dales was the development of the stamped quilt top promoted particularly by George Gardiner. Around Allendale, the lead mining region, George Gardiner drew on fabric with blue chalk elaborate central floral designs of roses and feathers. The borders around the quilt were made up of motifs including hammocks and fleur de Lis with complex corners and an overall diamond infill… The ‘stamped’ quilt tops were sold around the countryside including Weardale and Northumberland and became very popular due to the ease of use. 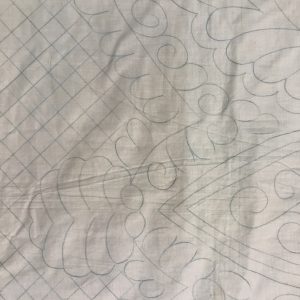 This photo was taken at The Quilters Guild Museum Collection of a stamped top drawn out ready to quilt . http://www.quiltmuseum.org.uk/collections/wholecloth/north-country-wholecloth-quilt-kit.html

Elizabeth Sanderson, apprentice to George Gardiner developed her own style and the distinctive ‘Sanderson Star’ is her lasting legacy. Next week I will go into more detail about the Sanderson Star and its design.

This is a wrap bag I made using some of the techniques mentioned in the blog. 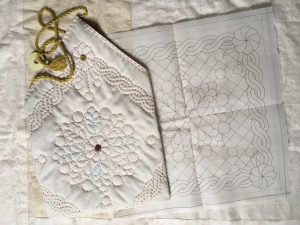 As you can see it can be fun to make and use these designs to create something new. If you need any help or advice just contact me .
I hope everyone is well and enjoying the time to do some creative activities.