A wholecloth quilt consists of one piece of fabric (often white) which is marked with a quilting design. It is then layered with wadding and a backing fabric that could be the same colour, be a floral print or coloured fabric. 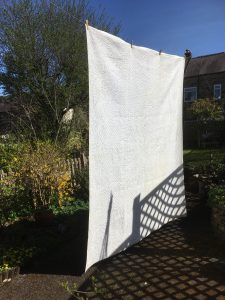 The wadding was traditionally wool but later cotton or a blanket were also used. The quilting as well as holding the three layers together would create the decorative design, giving the three dimensional effect that gives the wholecloth quilt its character.

The quilting was carried out on a large frame which was mounted on a pulley system in the cottages and could be lowered down for the whole family to work on. Children would be threading the needles as their mother would quilt. Quilting was primarily done by women but there were men who excelled at the craft too.

The quilt would have a central design of maybe a flower (often a rose) from which a combination of feather, leaf, and flat iron (with feather and flower in fill) motifs would radiate. 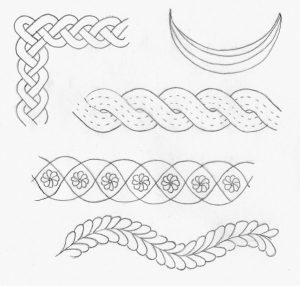 The borders would combine patterns of cables, feathers, plaits, hammocks and one of my favourites, the Weardale Chain. The corners were highly decorated and sometimes included a fan motif.

These designs were brought together by using an infill pattern such as diamond or wineglass. 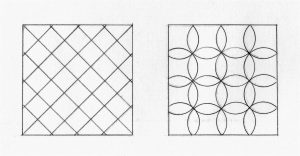 The wholecloth sometimes had a floral printed border which framed the beautiful stitch work.

Wholecloth quilts are difficult to photo and if you would like to view some more examples have a look at http://www.quiltmuseum.org.uk/collections/

I went on an informative course with Lilian Hedley. This design I created has the central rose motif with radiating leaf designs, a feather border with rose motifs in the corners and a diamond infill pattern. 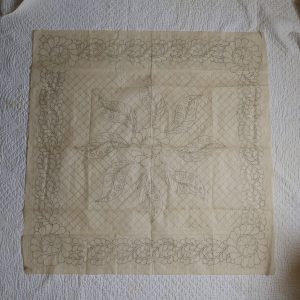 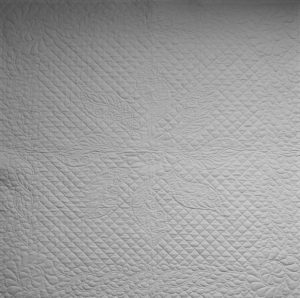