Elizabeth Sanderson (1861-1933) from Allenheads in the Northern Dales was an apprentice to George Gardiner. She ‘stamped’-marked out quilts with blue pencil markings throughout the area so successfully that she employed apprentices of her own. They marked out mainly wholecloth quilts but also did individual commissions. The quilt tops were taken by the packman to remote areas of the Northern Pennines and were sold at the local co-op. 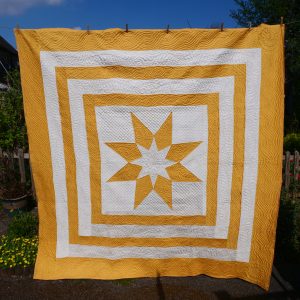 Elizabeth became well known for the Sanderson Star which she designed.

The quilt consisted of a framed pointed star surrounded by alternating coloured borders. I like the boldness and contrast of the design which is often Turkey red and white so this is a little more unusual being gold and white. It still has the blue markings on so has not been washed. I do not know the history of the quilt but I imagine whoever quilted this loved her craft and took enormous pride in her work. The accuracy of the piecing and the close stitches shows a high level of skill. All Elizabeth Sanderson’s pupils had to make a Sanderson Star quilt to finish their apprenticeship. 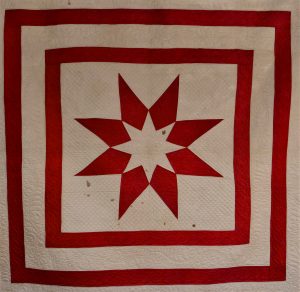 The centre of a Turkey Red Star from Beamish Museum

The patterns used in the Sanderson Star were distinctive and often had a central star with a rose or star design with the quadrilateral filled with a flower, feather and tendril design and a diamond infill round the star. The borders were cables, trails, and running feathers, the corners of the borders would have rose designs or diamonds. 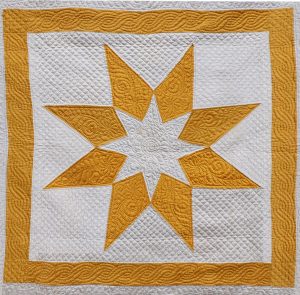 Central star with Rose motif in the centre and flower and feather infill in the quadrilaterals. 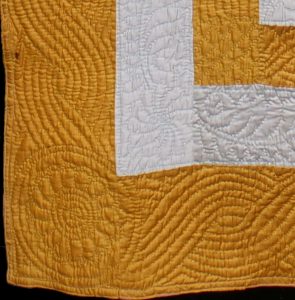 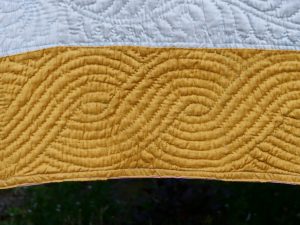 The marked ‘quilt tops’ created distinctive North Country designs and helped keep alive the craft of hand quilting in the mining areas of the Northern Pennines Dales and Northumbria.