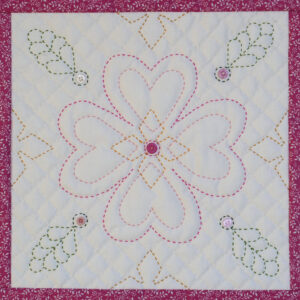 I am running a 4 week online course to make up this North Country Quilt design which will include information on our quilting heritage and a look at my collection of quilts. I am working with Lorrayne at  ‘Oh Sew Sweet ‘a patchwork shop near Barnsley.. This design can then be made up into a cushion or mat which we will help you to create.

I look forward to meeting you there. 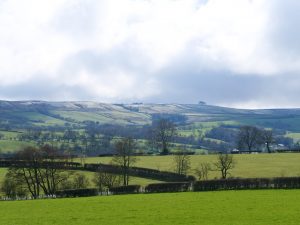 The Northern Pennine region including Allendale, Weardale and Teesdale had rich deposits of Lead. The Lead mining was at its height during the 1700’s &1800’s when thousands of workers mined the area, many setting up homes there. Some of the quilting clubs started at this time to bring in extra money into the home, particularly for those who had been widowed.

By the late 1880’s the price of lead was so low, the big mining companies withdrew and unemployment was writhe. Some of the  workers will have  moved into the coal mining areas further to the east of the country, around Durham, Northumberland and Newcastle. Here quilters clubs were set up by miners wife’s who had been widowed or their husbands disabled. The quilt clubs came into their own during the strikes and depressions of the 1920’s and 1930’s and provided a much needed income. 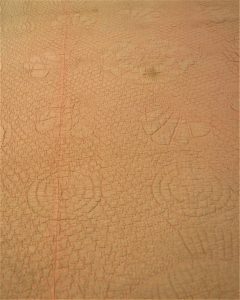 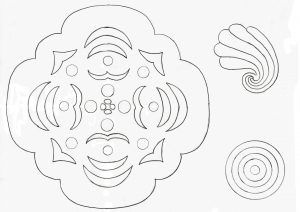 From the quilt I worked out some of the patterns used, the central rose design, the goosewing and concentric circles.

This is a simplified example of how the quilt club could work, which was like a higher purchase system.
The quilt club would have 25 members, each person contributed 1 shilling per week for 25weeks (the quilt costing 25 shillings) Names would be drawn out of a bag to determine the order customers would get a quilt. So once a week one person would receive a quilt and by the end of 25 weeks all 25 members would have a quilt.
After materials, wadding and thread for a quilt the Quilter was left with a small profit to live on.
The quilt clubs gave a continuation of the craft through the beginning of the 20 century and played an important role in providing a means of survival for women in hard times.
If you would like to read more M. Fitzrandolph in her book “Traditional Quilting” (1954) has interviews and stories about the quilt clubs which makes very interesting reading . 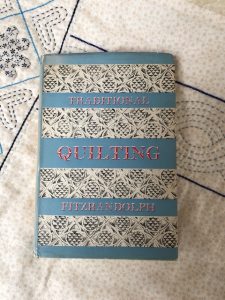 Next week we will look at a beautiful cot quilt made through the Rural Industries Bureau to be sold in London.

During October I have been working on new workshops for Dutton’s for Buttons , York and enhancing our hand embroidery weekly classes at The Sewing Shed  , Ilkley.
Following the Viking theme in York I have prepared a gold work class showing the basic techniques to be taught in December. 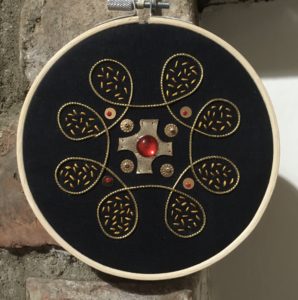 Next year we are looking at felt appliqué using the Viking themes of birds and beasts . 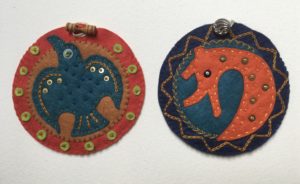 https://www.duttonsforbuttons.co.uk/workshops/
Go to Dutton’s for Buttons to look at our full range of courses.

Summer memories of sun and sea in Skiathos brighten up a rainy day, as does the colourful patterns and embroidery of its textiles. Greek embroidery is rich in motifs and patterns from the east and west. The Sporades Islands as a trading point was influenced by the Venetians and the Ottomans, the Christians and the Islamic empires. The resulting patterns contain human figures, ships (naturalistic and fantastic), birds and floral images.

This image if from the Embroiderers’ Guild collection – https://embroiderersguild.com/

A photo from the Skopelos Folklore Museum with a floral cross stitch design.

My holiday embroidery using chain-stich. I love the floral arrangement and tiny birds 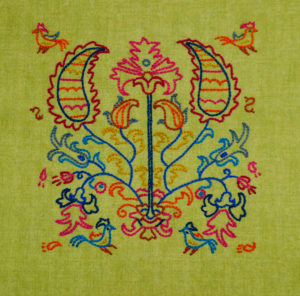 This proud cockerel is a design that you can use in an applique or just embroider in your favourite stitches.

Click on the picture to view it full size so that you can print it or download it.